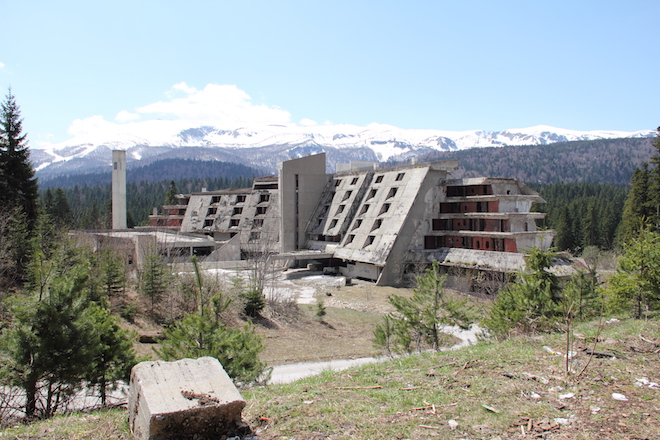 Folly 2 / Igman Hotel addresses the failure and collapse of political systems and the subsequent human tragedies that today are increasingly present.

The new-media installation is inspired by a hotel, originally built for the Olympic Winter Games of 1984, near Sarajevo. During the acts of aggression within the war of 1992 – 1995, the hotel was heavily damaged and blackened. Now, as a silent witness, the concrete structure still offers a glimpse into the optimism of Yugoslavian modernist architecture.

In the installation, by means of power-driven mechanics, a mock-up of the Igman Hotel is subjected to a composed movement: it slowly collapses and after a certain time, rises again automatically. This programmed choreography, among the other experiences of the installation, is created within the intimacy of the spaces of bb15 and links to a changing reality.

The work of Paul Devens is interdisciplinary, linking the fields of composed sound, architecture, video and performance. He exhibits installations in museums, art-spaces and galleries, makes interventions in public space, performs concerts in clubs, art-spaces and festivals and occasionally releases CD- and vinyl-albums.

The possible manifestations of physical space and its social context define the site-specific qualities of his work. To make a unique work in a given space necessitates that Devens engage a custom strategy to fit the specific situation, in order to unfold the distinctive qualities of that space.

Field-recordings of common sounds are lifted from their original context into installation based settings. These architectonic constructions, made specifically for the physical experience of sound, feature soundtracks or compositions consisting of the previously recorded sounds. The presence of an audience is an integral as part of the work.